In the wake of George Floyd’s unspeakably brutal, caught-on-tape death, epidemiologists and pundits around the globe have been scrambling to respond to the obvious question: how will ongoing, massive international protests affect the worldwide COVID crisis?

The jury’s still out, but one academic’s response really resonated with me. Yes, he said, the numbers will inevitably rise, but people are willingly risking their lives, just as people did in March, 1965, in Selma Alabama.

“This,” he said, and I will never forget it, “is our Selma moment.”

I am old enough to remember that moment (if you aren’t, Google it), and Martin Luther King’s eloquent, poignant response:

“Selma, Alabama, has become a shining moment in the conscience of man. If the worst in American life lurked in the dark streets, the best of American instincts arose passionately from across the nation to overcome it. The confrontation of good and evil compressed in the tiny community of Selma, generated the massive power that turned the whole nation to a new course.” 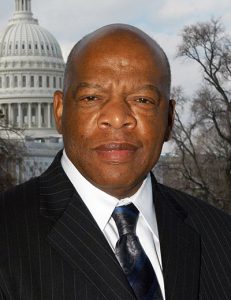 “Selma is a place where we injected something very meaningful into our democracy. We opened up the political process and made it possible for hundreds and thousands and millions of people to come in and be participants.”

Lewis survived a brutal beating by police during that landmark 1965 Bloody Sunday confrontation to become a towering figure of the civil rights movement.

But to what end? Over half a century later, lasting change has tragically proved to be an illusion. How, then, do we truly make this our Selma moment and achieve lasting change?

The only way I see to combat the ongoing, deeply entrenched evil of systemic racism is federally mandated anti-bias-driven K-12 education.

Let’s face it, by the time our youngest children enter school they have already been exposed to racist beliefs, whether overt or subtle. We need to provide a supportive, bias-free environment and a consistent, curriculum-based alternative to help them question their experiences outside the classroom.

Education is always, ALWAYS the key, and we have thus far utterly failed in this regard. But there are resources available right now that could be implemented immediately in every school across the country. One of them is Teaching Tolerance, a curriculum created by the Southern Poverty Law Center that provides, free of charge, a means to promote social justice, challenge bias, and engage students in discussions about diversity.

As Roby Chatterji, senior policy analyst for K-12 Education at the Center for American Progress (CAP), recently wrote, “It is critically important for newly energized allies, especially those who are not Black, to go beyond hashtag activism and enter this work by listening to the voices of community members and educating themselves on the history, causes, and consequences of systemic racism in the United States. Allies should also work with Black communities to support efforts to combat structural racism in education, housing, and other social policies. Their opposition, silence, or lack of engagement in these efforts can contribute to the perpetuation of inequities and further limit access to opportunities for communities that are Black, Indigenous, and people of color (BIPOC). Because systemic racism in education is a root cause of so many other inequities that BIPOC face, it is critical that allies stand shoulder to shoulder with these communities in calling for large-scale changes to the U.S. education system.”

Chatterji’s article, Fighting Systemic Racism in K-12 Education: Helping Allies Move From the Keyboard to the School Board, offers a three-pronged approach to moving beyond our Selma moment into a bias-free, socially just future. It is must reading for anyone who shares that vision. You can find it on the CAP website by clicking here. 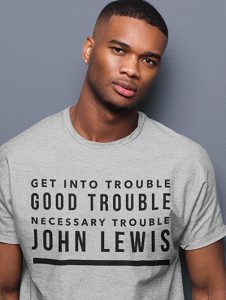 I cherish another quote by Selma veteran Congressman John Lewis: “Get in good trouble, necessary trouble.” In the midst of the COVID-19 pandemic, millions of people across the globe have risked their lives to “get in good trouble” and I, for one, applaud their courage.

In this era of apparel signage, I offer this link in remembrance of a great leader and to show support for those – then and now – who have risked their lives in the call for justice. This is the t-shirt I bought for myself, and everyone in my family will find one in their stocking this holiday.